Little girls love pretty panties. I am a lucky woman to have raised three daughters from birth. A step-daughter came into my life when she was (I think) 9 years old – I’m terrible with numbers and dates, ask anyone who knows me.  Children were much like space aliens to me when I first had one. My first child was a science project. Lucky for Katie that she was a girl.  If she had been a stepson, it would have been like starting all over again and picking up in the middle at that!  I can't imagine what sort of impression she would have got after meeting me. 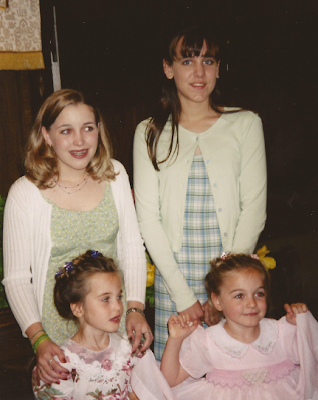 So back to panties. It was always important to me that my girls have pretty panties. Why? When I was growing up, panties were strictly functional and were something never (supposed to be) seen. Plain, white cotton, fruit-of-the-looms were all I ever had. To make matters worse, when my great grandmother died (I was like 12 years old) – I inherited all her panties. Ever hear the term “granny panties?” They were like 2 sizes too big so I had enough big, baggy, saggy old panties to last me the rest of my life. It really wasn’t that big a deal except for gym class when I had to change clothes in front of other girls – of course they made fun of me. But, you know, my underwear was less humiliating than some of the other things they made fun of me about.

I won’t name any names because I don’t want to embarrass any girls…but….I will tell a few little girl panty stories in my blog. I picked up one of my little girls from "a place" when she was like 3 years old. She was wearing a sundress and had been sitting in the dirt playing with a tea-set and making mud pies and such. Her panties were nasty, caked with mud, and she had mud all over her legs and bare feet. I didn’t want all that mess in my car so I walked her over to the hose, stripped off her panties, raised her dress, and hosed her off from the waist down. She was a bit gleeful but also worried to get buckled into the car with no underwear on. I assured her we were going straight home and she could take a nice bubble bath as soon as we were home. We pulled into the driveway and our neighbors were having a party. Guests all over the front porch and the neighbor man called to my daughter because he loved talking to her and she was always a chatterbox. He asked her what she had been doing. She said, “Well, I’ve been playing in the dirt all day long and look *pulls up her dress in front of everyone* I’m not wearing any panties!” The people all got a good chuckle and the neighbor man, clearly embarrassed, said, “Wow, you’ve got some good air conditioning going on there!” I called to her to put her dress down but of course she wasn’t listening, so I ran out and pulled her dress down for her and told her to come along. However, this being the child that she was, “simply” coming along was not possible. No, not this one. She twirled in circles across the driveway, all the way to the door, which made her dress stand out like an open umbrella and gave everyone another show – a grand exit.

I have many more stories about panties but this post is long enough.
Posted by KYLady at 7:15 PM

I am a husband, father, grandfather.

former area rep. for vanity fair mills in the late 1970's we made the cutest and most feminine little girl undies...

Thank you for your comment, Wolfe.
I’m delighted to have had little girls to dress at a time when little boy clothes were not so cute, at least regarding the ones manufactured in this country. That has all changed these days.