I had a great time visiting Sarah and seeing some of the country. It was quite interesting seeing how people live in another country. I loved the countryside and the small towns. The music was awesome! Sarah has improved her playing skills (on both banjo and fiddle) tremendously. I tried the Guiness and you know what? It's just gross. That dark beer is not for me. I liked Jameson until the first hangover, then nevermore. I'm a Kentucky bourbon woman and that's what I drank.

Here's what impressed me about the country-side. All the pasture land and the rock walls - beautiful. The yellow bushes (called Gorse) was blooming and very colorful this time of year. There were all sorts of lovely wildflowers, also most houses had tulip beds that were in bloom. Just about any house that has any sort of grass field (sometimes even very small fields), there would be some sort of livestock in it - horses, sheep, or cattle. The sheep looked pretty normal, but the horses and cattle are huge over there. Something else I noticed, many times you see animals laying in the field just flat like they are dead. If I saw a horse or cow laying like that in a field, I'd assume it was dead.
Sarah's apartment is on the Corrib river and I enjoyed watching the rowing teams practice. Across the river on the other side is a huge pasture with horses. There's a trail that follows the river that people use to run on, walk dogs, and travel back to soccer/football/rugby fields. I didn't count how many fields - like at least 8 of them I think. I ran on the path the mornings we were in Galway, running around the fields and through the wooded trails between them. I saw all sorts of unusual birds - my favorites being the wood pigeons and the magpies. Down toward the last ballfield, across the river is an old castle ruin. I only have one picture of it but it's not git to post. First picture here is a view of some wildflowers growing among some trees along the trail (college building in the background): 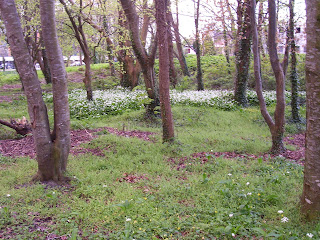 The university is big and has lots of international students. There were lots of people vacationing there from other countries as well - I heard all sorts of different languages on the streets. People aren't allowed to smoke in any buildings anywhere in Ireland. Also, not on buses or trains. Here's a no smoking sign: 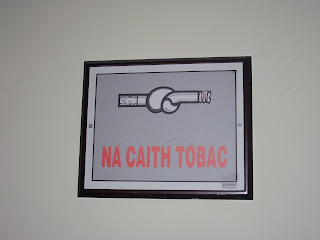 Some shots of the main university building which was a very impressive place: 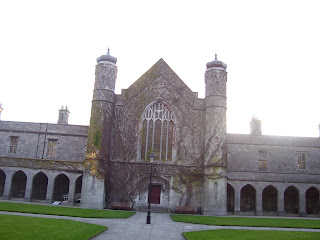 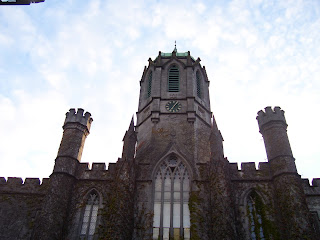 Our first adventure outside of Galway was a trip to the Dingle peninsula, and the little town of Dingle. It was a long bus ride, aborted when we got to Tralee because Sarah got a call from her friend Breannan (I doubt I spelled his name correctly) who invited her to meet him in Kilarney for a session. There was no good way to get back to Kilarney by bus so he drove to Tralee and picked us up. Kilarney is a decent sized town (maybe as big as Ashland) and we got there in time for the session. Sarah played with Breannan, who played guitar, and two other musicians, a young couple who later insisted we all spend the night with them. I was so tired that night to begin with and I'd had too much to drink at the pub, I can barely remember anything. We got to their house around 1:30 in the morning I think. They had a lovely little house in Kilarney, and a beautiful dog (a blonde lab) they called Buddie. I kept having trouble remembering their names because they are unusual to me - Emir and Tige - I'm sure those aren't spelled correctly. I kept thinging Lemur and Tiger to help me remember. Emir is an excellent fiddle player, who studied violin in college but was unable to get a jo with the only real orchestra in Ireland. She performs with her husband and is also a music teacher at a primary boy's school. Tige plays a concertina and is quite good. They sounded great together.
The next morning, Emir got up at God knows what time (I wouldn't know, I was dead to the world) and fixed a proper Irish breakfast. Unfortunately, I was much to hung over to even enjoy looking at it. She served 3 kinds of sausage, rashers (bacon), beans, coffee, tee, several kinds of juice, and two kinds of toast (with jelly and butter). She also set out cereal and apologized for not making potatoes as well. She asked how we liked our eggs and I assured her there was no need to make eggs for Sarah and I. Breannan didn't get up for breakfast but ate later when he finally emerged (around noon). We left there after good-byes and visited a national park which was beautiful. I saw the most gigantic rhododendruns I've ever seen in my life, most not yet in bloom but they will be beautiful when they do. I could have spent days there but we only stayed an hour or so, walking parts of a few trails and then making our way through the mountains toward Dingle.
We stopped in a little town called Middletown to see what was happening at a horse show, or perhaps it was just a little festival where farmers were selling livestock and people were selling produce and crafts. Breannan called his son's mother to see if she wanted ducks. She did so he bought 3 adults and 2 babies. He would have bought all babies but the farmer nor his wife knew how to tell the sex of a baby duck. We saw all sorts of horses, ponies, puppies, sheep, and goats for sale, as well as chickens, ducks, and some exotic birds I'm not sure what they were - perhaps pheasants or something like that. 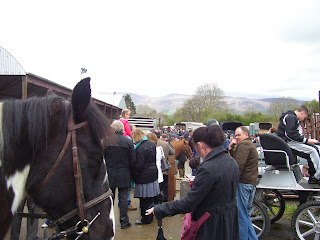 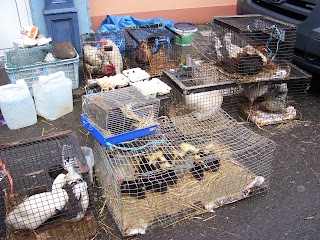 After much twisting and winding mountainous roads, we arrived in Dingle. Breannan dropped us at a bed and breakfast place that he thought would be good. It was a great place to stay. A pleasant room overlooking the bay, plenty of hot water in the shower, and "free" breakfast. The B&B man gave us a decent rate, 35 Euros per person per night. That's one thing I really appreciated about Ireland, the price is the price - no tax or charges added on. The free breakfast was unbelievable. We walked in and there was all sorts of bread, cereal, and fruit spread out on the counter. Then, the inn keeper came in and asked us if we wanted tea and how we wanted our eggs and if we wanted bacon. He made fried eggs, bacon, and toast for us and served us. We spent an extra day in Dingle, Sarah played a session that night with Breannan, his father, Brannan, and his younger brother, Cormick. That turned out to be a very late night, we stayed in the pub after it closed, playing more music and drinking, and then went on to Breannan's apartment for more. Sarah stayed on and I walked back to the B&B..I think I got back around 3:30 in the morning and Sarah came in sometime after that. We got up the next day and explored town a bit more until time to catch the bus to head back to Galway.
The town of Dingle has a lovely harbor and old ruins on top of the hill across the bay (you might be able to make out the tower in the picture of Sarah sitting in the window knitting. She was working on a new pair of socks, a gift for one of her friends. The buildings look a lot alike but they paint the doors every color you can imagine. 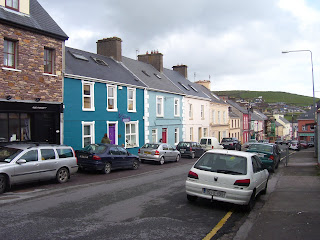 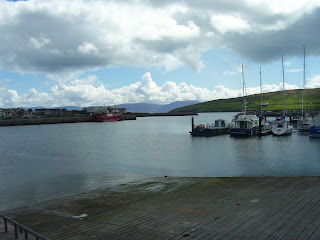 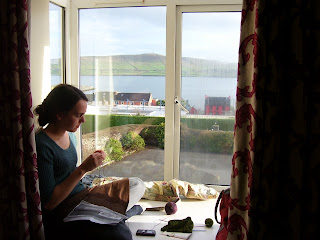 This post is getting too long and I need to do other things. I will post this one and do another later on. We visited the Cliffs of Moher and our tour guide was awesome! He gave us some great history about one of the castles and about Ireland in general. He was very entertaining and certainly an unexpected and delightful enhancement to the tour. We had perfect weather for visiting the cliffs. I was more interested in the Burren, the region we went through before we got to the cliffs. I will write more about it later.