Happy birthday to my babies - they were 13 years old yesterday. We had a little birthday celebration. I let them select cell phones and ordered online. They should have their phones tomorrow, I think. We will give Erin's old phone to Jerry since he has the crappiest phone in the house. After the switching is done, I will be the proud owner of the crappiest phone in the house. Not fair, but I will get a new one in June...maybe.

I've got photos of Erin and Emily doing birthday rites. They had identical cakes. Dave gave me a hard time...I always buy birthday cakes from him. I walked into his shop 15 minutes before closing and told him I needed two birthday cakes. He smiled big and asked "When?" I told him, "I need them now." His smile quickly changed to frown and he said, "Mom, you didn't wait until their birthday to remember the cake, did you?" I gave a sheepish "yes" and he commanded the situation. He took a quick inventory of the showcase and produced 2 Santa Clause cakes. I said "Perfect!" and he grabbed the icing pen and wrote the girls' names on their cakes. Dave is the best. I bought 3.5 dozen cookies too to take to Molly's party and as I was walking out the door, he came carrying two packs of candles and just tossed them on top of the boxes (free of charge). He said, I bet you forgot the candles too. I smiled and thanked him. Forget the candles? You know that's the thing I've liked most about birthdays my whole life - the candles. I use to steal the birthday cake candles out of the garbage can. Let no candle go unburned!! 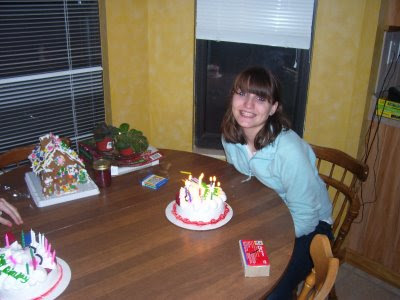 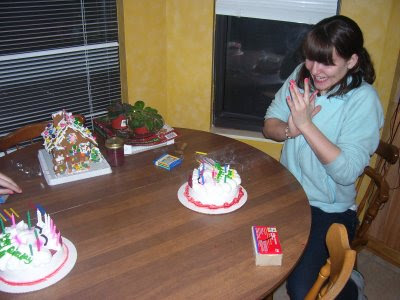 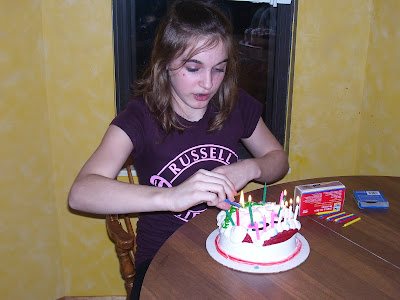 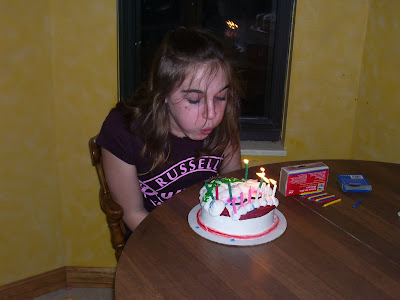 You might have noticed the Gingerbread house in Erin's pictures. That is Emily's creation. She loves to make gingerbread houses. Someday I will make a gingerbread house....yes, that will be a good aspiration. I want mine to have spree and smarties...and crushed peppermint on the roof.
Well, tonight I played the role of suck up. My prof is encouraging participation during "reading weeks". So far, I haven't been getting into the reading aspect of "reading week". But with the challenge posted, I made an effort. Many of the required articles I've surveyed thus far are L-O-N-G and dreary. I found the two shortest articles assigned for the first 4 weeks and picked the two shortest. I read them and wrote summaries and critiques, and submitted. I got in there first, which means I'll be ridiculed because I probably only gave him 60% of what he was looking for....still, I pioneered! I took the risk and by doing so, I did the least amount of work. Excellence through laziness! Thanks be to God.
Posted by KYLady at 12:43 AM