When Emily was in kindergarten, just weeks after her 6th birthday, she ran away from home.  It’s a morning Someone and I will never forget.  I can only say how blessed we were that we learned she was safe and in police custody before we learned she was missing. 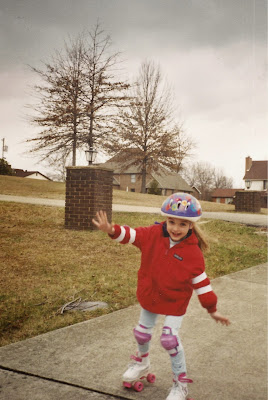 It was an unusually warm January morning.  I was always first up, and apparently my alarm clock always woke Emily up.  While I was in the shower and everyone else still sleeping, she sneaked downstairs, opened the door that goes into the garage, and slipped out under the garage door.  We have a security system, but the door she used (at that time) had no chime when it opened.  It was the only unsecured door.  We always left one garage door up about 3 feet so our dog could have access in and out of the garage where she slept.


Emily was afraid of the dark, but she went downstairs through a dark house without turning on a single light.  She left with no shoes, wearing only a flannel nightgown.  She was two blocks away from home when a neighbor man, who by chance was up extra early to go to work, saw a little girl in pajamas walking down the side of the road with no coat on, barefooted, and dragging a white blanket.  He pulled up beside her, rolled down his window, and asked her if she was lost.  She ignored him.  He then parked his car and got out.  When he got closer, she put the blanket over her head and stood like a statue.  He told her to wait where she was and he called the police from his cell phone.


I was out of the shower and getting ready for work when I heard the phone ring.  Someone (still in bed), picked up, answered a few questions, and asked me to check and confirm that Emily was in her bed.  I walked into her room, no Emily.  I checked under the bed, in the closet – no Emily.  PANIC.  “She’s not in her room!!”  I yelled to Someone.


I then started through the house calling and searching for her, waking everyone up.  Someone caught up with me and told me the police had her and were bringing her home.  We waited in the driveway.  The cruiser came, the officer opened the car door, and out comes little Emily with a sucker in her hand and smiling like nothing had happened.  I grabbed her up and hugged her so tight she said, “You’re squeezing me to death.” I didn’t care, it was hard to let go of her.


So after all that drama, she said she ran away because she didn’t want to go to school.  A virus was making rounds and many of the kids in her classroom had thrown up in class.  Just the day before, a little boy sitting at a table across from her threw up on a paper she was coloring – that was the last straw.  I took her to school that morning and had a chat with her kindergarten teacher.  Anyway, her teacher talked to her and they worked something out.


That very afternoon, I had the home security people come back and install a chime on that door to the garage.  For a few mornings after that, I peeked into both girls’ bedrooms just to be sure they were there.  Coincidentally, the man who found Miss Emily is the husband of the lady who works in my dentist’s office.  She told me all the details about what happened that morning and we had a good laugh together.  Thank heavens it all ended well so we could laugh about it.
Posted by KYLady at 1:28 PM