waiting for the caboose

I started to write a post several times and deleted it.  Why?  This “topic” has invaded my brain space lately and won’t leave, but every time I start to write about it, it turns out sounding like an obituary…or a rant.
My older brother, D, is killing himself with vodka and everything else he can get his hands on.  It’s like sitting at the train crossing, watching a train barreling past, and thinking surely the caboose will be coming along soon.  How long can one train be?

It’s been more than a year ago now, that my younger brother (M) and I found a house D could afford to buy and assisted him through the process to buy it and move into it.  D has been unable to work for many years because of his drinking and drug problems, but he inherited money from our grandparents – enough to buy a small house in a declining part of town and to live on for a few years.  We honestly didn’t expect him to live a year, and just like our grandfather did for years, he has hung in and surprised us.  His drug habits have depleted his resources quicker than we expected.  His well is running dry.


M has a key to the house and checks in on D a few times a week.  He passes the neighborhood on his way to and from work.  We both expect for M to walk in one day and find D dead.  Usually M walks in and finds D passed out on the couch or floor.  D falls a lot.


So, well, D is never really sober because if he gets too sober, he has seizures.  M wanted us all to get together for breakfast on Christmas Eve morning.  It sounded like a bad idea, but M is lonely these days and holidays can be extra lonely for people who are alone in this world.  I picked M up and we went to D’s house to assess him.  D was expecting us and seemed sober enough to make a public appearance (i.e. he was able to stand up and move his feet).  We helped him into and out of my car, took him into a restaurant, and ordered for him.  We sat at the table and D looked around, obviously confused about where he was, and asked who died.  M and I laughed and remarked how incredibly odd it seemed for us all to sit together in one place with no funeral going on. 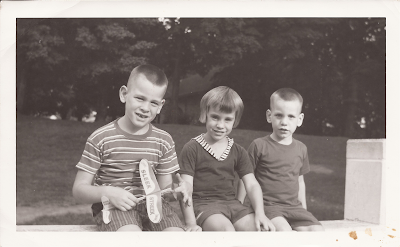 The most upsetting thing about that morning was that D kept forgetting who I was.  Several times, M and I reminded him that I was his sister.  He would then look at me with a surprised look on his face, and tell me he misses seeing me.  Perhaps I should schedule to see him more often, but I don’t want to.


In my mind, D is already dead.  He is brain-damaged past recovery.  He’s not been the brother I prefer to remember for almost 30 years.  He’s had two near-death experiences in the past year.  Even when he’s detoxed, the only thing on his mind is getting a bottle of vodka and some pills.  Both times, he stopped on the way home from the hospital to get his boarding pass… to jump right back on that train.
Posted by KYLady at 1:08 PM

Very sad. For everyone. We have a situation that is similar with my husband's sister. A train wreck coming on strong. Sometimes it is hard to know how to react to each "situation" when they arise (and they are very regular). With sympathy? With anger" Frustration? Whatever reaction she never changes despite her good intentions.

The photos of the three of you are so sweet.

I think if she has intentions to improve, then there is at least some level of hope. My brother has no intentions of changing. He can't imagine living without his drugs and alcohol, and there is no reasoning with him. It is sad and frustrating to see him throw it all away and not be able to do anything.

My younger brother inherited our grandparents' house and just recently found some photos of us and old family photos in a box in the garage. I thought they'd all been discarded so it was wonderful. Unfortunately, it looks like I never had a decent haircut until I was old enough to pay for them myself.