My brothers and I spent a lot of time on my great grandparents’ farm when we were growing up. One of my favorite places to be was in the barn loft. The barn was close enough to the house so that I could usually hear if my grandmother was calling for me, but too far for her to walk over to check on my whereabouts. When I thought she might come looking for me, I would climb down from the loft and slip out the back of the barn through a wide crack between the boards. The immediate ground behind the barn was always a bit damp so they rarely mowed it. It was usually grown up in tall horse weeds and pokeberry bushes. I’d walk straight back a few hundred feet (hidden by the tall weeds) and then cut over to the path and double back so that if anyone saw me they would think I was innocently walking up from the back fields. 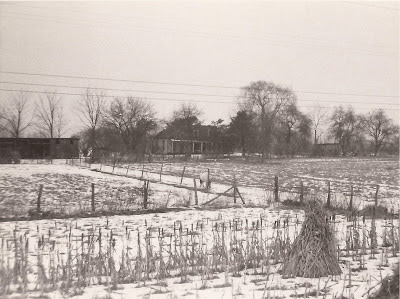 Sometimes the hayloft had bales of hay stacked in it. That was when I loved it most. Not only was the smell of hay pleasing, but being able to climb up high on the bales was fun. From up on top of the hay, I could see bats hanging from the rafters and gigantic spiders sitting in their webs. I liked to rearrange the bales to make foxholes and sometimes (less often) tunnels. I would partially cover the opening of the holes with a bale, leaving just enough space to slide down into the hole with a supply of candles, matches, comic books, and candy. It sounds kind of dangerous to have open flames in a hayloft, but really, the hay was always a bit damp, especially down inside where I was.


Sometimes, my great grandfather filled the barn with tobacco. I hated tobacco – it stunk, it was dirty, and it attracted lots of spiders and bugs. I didn’t play in the barn at all when it had tobacco in it.


One dreary winter afternoon, my brothers and I were loitering in the barn loft. The tobacco had recently been moved out to be sold.  The loft was bare except for some some baskets, wooden crates, and odd junk.  There were ropes and poles left in place from where workers had climbed up to take the tobacco down.  My little brother tied hangman’s nooses into the ends of each of the ropes he could reach while my older brother and I threw corn cobs at each other.

The nooses gave me an idea.  I placed a crate next to one of the ropes, grabbed a noose and put my head through it.  I was wearing an old lady’s headscarf that day because I’d recently had an ear infection - my grandmother insisted the wind and cold would make my ear worse and threatened me if I dared take it off.  I tied the scarf over my eyes like a blindfold, pulled a candy cigarette out of my jacket pocket and pretended to smoke it  (and then ate it).  I instructed my brothers to tie my hands behind my back, but my younger brother immediately objected, reminding us that our grandmother would whip the shit out of all of us if she caught us. My older brother found some short pieces of dirty twine and tied my hands behind my back.


There I stood on the crate, imagining myself in an old Western film ready to be hung in front of townspeople.  I wailed that I was innocent, they had me confused with someone else, and dramatically begged them to spare my life.  My older brother asked if I had any last requests, but before I could answer and very much to my surprise, he kicked the crate out from under my feet. Down I went onto the floor of the loft, horizontally, and fortunately the rope was long enough that the noose didn’t cinch up. I got a bit of a rope burn around my neck and the air knocked out of me, but nothing more. “You stupid son of a bitch!” I shrieked, just as soon as I could get enough air. He made a speedy escape down the creaky ladder.  My little brother fiddled with the knot to untie my hands, and finally cut the twine with his pocketknife.  We quickly untied the nooses and left the barn. As far as I know, nobody ever found out about the incident.
Posted by KYLady at 11:07 PM