Linda mentioned there are lots of snakes in the area where she was hiking recently.  Her comment reminded me there was a snake in my dream last night.  Not just any snake...it was a giant basilisk like the one in Harry Potter movies. 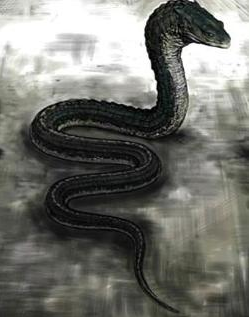 The most horrifying part of the dream wasn’t the snake though.  Like most of my dreams, there was a blending of time, people, and places.  In the dream, I was married to Someone but we were living in the trailer I lived in one summer many, many years ago before I married my first husband (H1).  Erin and Emily were toddlers and we had Gracie.  The giant snake slithered across the porch and I was trying to keep the kids and Gracie away from it because somehow I knew it was poisonous and they wanted to play with it.  I screamed for Someone to come and kill it.  It slithered into a large barrel and Someone’s plan was to reach in with his bare hands and pull it out.  IMAGINE THAT!!!  Someone freaked out one time when I asked him to help me catch a hamster.  He squeezed it so hard it bit him and he dropped it.  He said it gave him the willies to hold a rodent.  He also refused to babysit the iguana when I cleaned his cage.  Honestly, I liked playing with Norse (Sarah’s iguana) but I don’t like handling cold-blooded creatures.


ANYWAY...so Someone bent over the barrel to grab the snake and a little brown monkey jumped on his back.  Someone freaked out, grabbed it by the feet, turned it upside down.  I screamed, “NO!!!” but too late.  He twisted its head off and tossed it to Gracie.  Then he flung its poor body off the porch into the grass.  Enough of that!  I woke up.


I used to tag along in the winters when H1 went grouse hunting.  When he shot one and the dog retrieved it, he’d take it from the dog’s mouth, twist its head off, and toss it to the dog.  The dog would eat the head - crunch, crunch, crunch, gulp.  Grouse have small heads in comparison to their bodies.  He would shake the body a bit to get most of the blood off, and shove it into his coat pocket.  I’ve seen it done so many times it’s forever etched in my memory.


I used to cook Grouse and lots of other game when married to H1.  Grouse is kind of dry and very dense meat.  I’d stuff it with apples, use wood toothpicks to wrap and pin bacon around it, and bake it in a tightly covered dish.  It was pretty good.  I also made good rabbit in those days.   When we had parties, I made large platters of rabbit for guests.  I cooked squirrel a few times too, but squirrel tastes gamey no matter how much seasoning you use.  It’s all dark meat, and just kind of stringy.  I remember biting into a piece, chewing, and suddenly crunching into something hard.  I spit out a piece of silver metal and was sure it was a filling.  Oh SHIT!!   I jumped up to find a mirror, but H1 examined the pellet on my plate and called to me that it was only a piece of buckshot.  Thank God for that, but it gave me another reason to avoid squirrel meat.  It turned me off completely.


So well, the girls are gone on a school trip since yesterday afternoon.  They get home tonight.  I’ve frittered away enough of the day.  Slept late, took Someone out for lunch since he was nice enough to take my car for an oil change (a miserable chore), and then went to the grocery store.   So now it's time to push away from the laptop, clean the kitchen, and bake a cherry pie to take to Sarah tomorrow.  All the while, checking my email every hour and hoping to hear some good words from my committee-man and chairman.  Still waiting, waiting, and more waiting.
Posted by KYLady at 4:34 PM