Yesterday was Thanksgiving.  We always go to Someone’s parents’ house for a big dinner on holidays such as yesterday.  We used to do this for lesser holidays and birthdays too, but Someone’s mother is getting older and it’s just too much for her to do so much so often.  Now that most of the grandchildren are older with lives of their own, it’s just not feasible to get everyone together every holiday.  When we have these big feasts, everyone brings one or two dishes, and Someone’s mother roasts turkey and ham, makes dinner rolls from scratch, and bakes pies.  It’s still a tremendous amount of work for her, but she doesn't do any clean up or putting away.


Someone’s mother and sisters are wonderful cooks.  Someone tells me his sisters use to cook and bake all the time when they were growing up, and he was always happy to be their taste-tester.  Quite honestly, the man will eat almost anything and I’ve been told that as a boy, he was even less discriminating.  I’m not convinced his stamp of approval was much of an appraisal.


As for me, my culinary skills are adequate, not brag-worthy, but at least nobody has starved to death under my watch.  Unlike Someone’s sisters, I didn’t learn much about cooking until I left home.  My grandmother hated cooking and everyone knew it, so I came to believe cooking was just another chore, like cleaning the bathroom or doing the laundry.  My grandmother didn’t like people in the kitchen when she was cooking, so I rarely even saw food being prepared.  It was always my responsibility to do dishes and clean up the kitchen.  When my grandmother cooked a big dinner, there were always extra pans and pots.  I came to dislike holiday dinners as much as she did, just because of the motherload of dirty dishes that resulted. 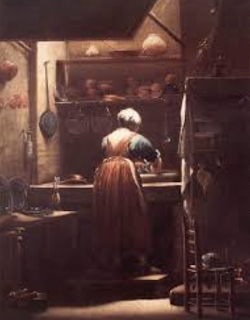 In 8th grade, all the girls in my school took a home economics class.  Whereas I was a wizard in sewing projects (my grandmother and great aunts taught me to sew), I was a dunce when it came to cooking projects.  We were taught basics such has how to peel and cut up stuff, how to measure, and safety when using a stove.  In teams, we baked cookies and loaves of banana nut bread, and fried chicken.  We learned to set a table too, and use basic table manners.  It was sort of like charm school in that regard.


When I went off to college and began dating the man who would become my first husband, he sometimes asked me to cook it for him.  The first time he did this, I was so embarrassed – I had no idea how to begin. He expected me to just tacitly know (because I’m female) how to walk into any kitchen and stir up dinner.  It was he who really taught me to cook, and for that I’m grateful.


And so, because it’s Thanksgiving time, and someday maybe I will actually cook a real Thanksgiving dinner on Thanksgiving Day for somebody, I always cook just for the practice of it.  I’m pleased to report, everything turned out acceptably well this year.  I baked pumpkin pie and pecan pie.  I roasted a turkey in the oven not the microwave, although I’ve cooked the best turkey of all time many times in the microwave.   Today’s turkey was roasted in the oven and it turned out just fine – not too dry.  I made a hash brown casserole, vegetable casserole, layer salad, mashed potatoes, dressing, corn bread, and believe or not, gravy.
So here I sit in front of my computer now, procrastinating.  Everyone has eaten their fill.  All the leftovers are tucked into the refrigerator.  The girls have gone off to friends’ houses, Someone is taking a nap (of course…the Y gene requires sleep to process so much food), and soon I will begin cleaning the kitchen.  It’s OK though.  I’ll put some music on and sip some bourbon while doing my work.  By the time the kitchen is clean, I might just be in another world.