asleep at the wheel

It’s a long story about the past few days. Things seem to be back on track at our house and that’s a very good thing. Life is so much easier when one can live it in the deep ruts of routine. Not that I like routine so much, only that I like when life is at least somewhat predictable instead of being bounced around like the metal ball in a pinball machine.

I've been up late the past few nights tending to “issues” going on.  Last night, it just wasn’t enough hours of sleep so I’ve been dragging all day today.  On any workday, the afternoon 2:00 slump is always the worst time for me. This afternoon, I was typing a response to an email and zzzzzzz…I fell asleep right at my desk in mid-sentence. Embarrassing, and here I am telling on myself, but it was only a brief catnap.  First I misspelled a word, then it all became gibberish. When the crash came, it looks like I was backspacing with the wrong key.  I snapped a photo with my iPhone because...because I can :)  (If you want to see it, click on the image to enlarge it). 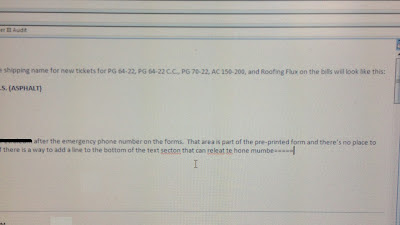 ﻿
Erin took her road test this morning and passed.  She is now a licensed driver and extremely pleased with herself.  When she got the license, our car insurance doubled.  I'm sure she hasn't even considered the cost of insurance.  Last night, I had Erin put gas into the car that she and Emily will share (for as long as it works for them to share a car).  The pump shut off around $48 and Erin remarked "Driving is expensive.  I'm going to have to get a job."  She got no argument from me.

Emily is not ready to try for a license yet.  She needs more practice parallel parking and doing the ridiculous, but required, turn-about.  Both of these are mostly archaic practices in today's world.  Being able to parallel park is handy on very rare occasions, but I've never executed a turn-about in all my years of driving.  I don't know anyone who has.  Backing in and pulling out into traffic is supposed to be safer than pulling in and backing out into traffic.  I would only do either of those where traffic isn't heavy; otherwise, I'd just find a parking lot to turn around in, go around the block, or just do a big U-turn.
I'm still waiting to hear from the board about my change request. 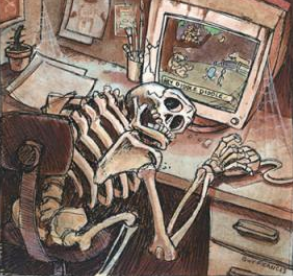