I haven't been keeping up much lately with blogs, e-mail, and other computer stuff.  I’m off on vacation with my family.  We have a house sitter who is spending lots of time with Gracie, but I miss her terribly.  The cats will be fine as long as they have food and water, but dogs like to have people around.  I miss my dog.  :(

The data collection process for my study has stalled.  I petitioned the IRB to allow me to offer gift cards and to let those who have already participated invite their co-workers to participate.  It's been 10 days and still no response from them.  Nobody is in a hurry to get this finished besides me....obviously.  For now, I am watching nothing happening with my survey and waiting for an email from the IRB.


We visited Florida, a 15-hour drive from home, and then drove north to South Carolina where I am now.  Getting down to Florida was hell.  Someone insists on doing all the driving because our newly permitted drivers will not speed and have no experience driving in intense traffic yet, and I don't speed enough.  In a nutshell, his aggressive driving  and road rage create a lot of stress for any passengers as well as those who must share the road with him.  By the time we got to Florida, I had a major migraine and Erin had a headache.  I thank God we arrived unharmed because we had a few situations that could have been tragic.  If I were a drama queen, I would have opened the car door, fallen to my knees, and kissed the parking lot when we pulled into Universal Studios. 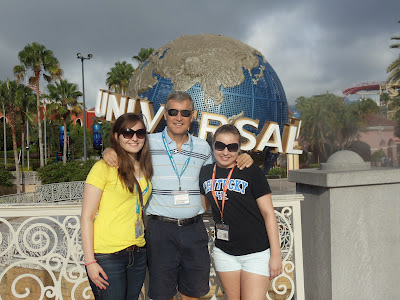 ﻿
Anyway, we visited universal Studios and Disney World for five days of non-stop "fun".  We took a tour of the Everglades.  We saw beautiful birds, alligators, and all sorts of unusual insects and flowers all in their natural habitats.  We could look down in the water and see small alligators and we saw gators on their nests.  We did the tour in an airboat; very noisy and a new experience for all of us.  The birds and water plants were interesting and our guide was somebody who worked as an environmentalist before he retired to start this tourist business. 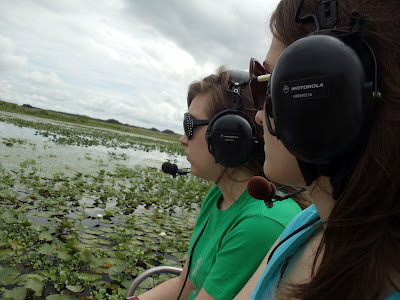 ﻿
The night before we left Florida, Someone and I had a "discussion" about his driving.  When four people co-habitate a tiny motel room for six days, stand in 95+ degree heat for long hours, get tired, etc....they all get cranky and tired of looking at each other.  When someone left the room for a bit, the girls complained about their daddy's snoring and hogging space around the sink.  When the girls were out of the room, Someone bitched about their shoes in the floor and the amount of crap they brought, as well as the plethora of products they use in the shower.  God only knows what they complained about when I was out of the room.
Anyway, the "discussion" about driving occurred when the girls were out of the room and ended with him stalking out and slamming the door (I'm sure our motel neighbors appreciated that).  A few hours later, he came back and it was the silent treatment until he had no choice but to ask for help navigating to South Carolina.  Someone has no sense of direction, can't read a map, and gets confused when trying to take orders from our GPS.  To his defense, our GPS is shit.  I had a TomTom and it was great.  It broke and I replaced it with a Garmin.  This will be my last Garmin.  The drive to South Carolina was much better.  Someone drove at a reasonable speed and didn't blast the horn at anyone even one time.  The girls were able to sleep part of the way.  I'm glad we had the "discussion".
So it's time to get off the computer and join family on the beach.  Perhaps I'll write more about beach fun later.
Posted by KYLady at 10:48 AM

Oh, how stressful. My husband no longer asks me to read maps. I am map dyslexic or something. He used to think I was deliberately misreading maps but now realises I just find it very, very difficult. The arguments we had were very LOUD.

Sharing a hotel room with one person is bad enough. With four in the room is worst. Especially when two are teenagers. I don't envy you.

Next time, you should go out and slam the door and come back hours later. Then you can go off, have coffee, do shopping and enjoy your time alone. I can speak from personal experience. Just don't let on that you enjoyed your time alone. People might not like that.

Hope the beach was lovely. Something about where the sand meets the sea.

Linda - Thanks for your comment. I’m not a slam-the-door kind of person, and there’s no need since the least little thing sends him out the door. If I get that mad, I want to do some major damage – slamming a door wouldn’t even make a dent. I have considered being gone when he gets back – let him wonder for a while where I went. Fortunately, we are a pretty good match and our arguments are almost always over stupid stuff.