Things are just nuts at work (have I been repeating myself a lot lately??).  Scheduling for a big important event fell through the cracks today and landed in my lap. This event concerns a huge, multi-million dollar, enterprise-wide project for which I am just one of several lowly, sub-project managers. The primary project manager is busy on another humongous project and he dropped the ball on planning for this event. So today, I looked at what has transpired from his point of view, and made an executive-like decision (for him) to postpone the big event that was supposed to happen next week. It seemed like the most rational thing to do given the circumstances and uncertainty surrounding the hoopla happening this week that might extend into the upcoming weeks. Right or wrong, the decision and actions I took today have far-reaching implications. It made me feel POWERFUL to handle it. I kind of like having control of things, especially when I’m not responsible for consequences.

Emily is as quiet as a church mouse in the mornings, and sometimes I’m not sure if she’s up and getting ready for school when she's supposed to be. She sleeps in her bedroom with the door shut, gets up, dresses, and puts on makeup before she ever emerges from her room. So this morning, it was later than usual and I became concerned that she might have overslept. I opened her door and stepped into the dark room. It was so cold, I could see my breath. Not only did she have the windows open, she had a fan blowing on her. In the dim light, I could see a mound of blankets and comforter.  I wasn’t sure if my daughter was in the pile, so I started to walk toward the bed but stepped on the cat’s tail or paw…or some body part. The cat screamed and scrambled away, scaring the bejeezus out of me, but no movement or sound came from the blanket pile.  Just as I neared the bed, her alarm went off. She popped up, saw me standing there, and shrieked - apparently she didn’t hear the cat and thought something horrible was stalking her. The cold dark room reminded me of the scene from The Exorcist, where the priest and sitter go into Regan’s room when she’s sleeping. 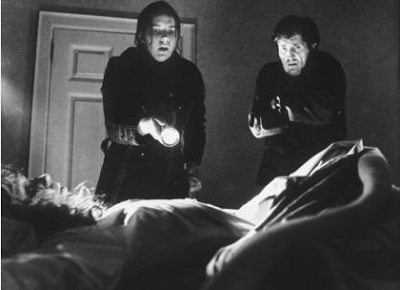 Quite the opposite of her sister, Erin is noisy in the mornings. Emily takes a shower at night whereas Erin takes a shower every morning.  The bathroom is right next to my bedroom so it's hard not to hear everything that goes on in there.  When Erin is getting ready for school, there’s all sorts of banging and thumping that goes on. Sometimes I hear moaning, whining, and grumbling if the morning ritual is not going well. When she is through in the bathroom and I go in for my shower, there is usually water all over the floor, hair all over the sink, and sometimes towels and paper towels scattered about. I sometimes think an exorcism has just taken place…perhaps it has.