What about Orion? Son of a Gorgon!

My last post ended with questions about why Orion has a place in heaven - what makes him so worthy?  Mythological stories are about great victories, passionate love, innocence, jealousy, dispair, and horrendous suffering - all the stuff that oftentimes makes no sense at all in real life.

I started researching Orion today.  This guy has heritage.  He was known as a great hunter - he's the son of a god, Poseidon, and his mother was Euryale, a gorgon.  What is a gorgon, or rather, who are the Gorgons?  The Gorgons are three sisters who pissed off Athena.  The girls are Euryale, Medusa, and Stheno.  Poseidon was "doing" these sisters in Athena's temple.  She caught Poseidon with Medusa - Medusa is blamed and Athena turns her into a gorgon with a snaky body, viperous hair, fangs, claws, scales, eyes that turn people to stone, and wings (although in this image, wings are missing). 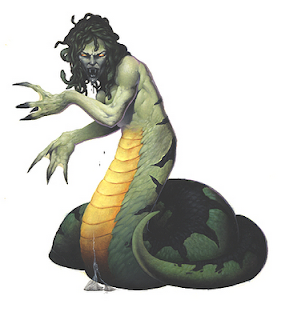 It seems that the sisters saw Medusa after she was transformed into a hideous creature and started making fun of her.  They boasted they were more beautiful than her and then said they were more beautiful than Athena.  Bad thing to say!  Athena put them in their place by turning them into gorgons too.  What I'm really wondering now is if Euryale got pregnant before she was a gorgon, or if Poseidon did her after.  Whoa!  That'd be a double-bagger for sure!

Not me! I've never been in that situation - not even a single bag situation :)