Things have been a bit hectic lately.  Classes going on – fortunately, all are online just now.  Emily is home for the summer (still working her part-time hellish retail job, but she is done with school until August).  She has inspired me to begin going back to the gym.  I love going…I have no idea why I haven’t gotten back into the habit since retirement, but we’ve gone together more days than not for the past two weeks.  Honestly, I have no excuse.  The gym is only less than 10 minutes from where we live.  Lord knows I’ve become a turnip over the past few years…it’s time to turn back the clock a bit.

I had some spare time one day last week and ventured to two greenhouses BY MYSELF…it’s a wonderful thing to go by myself so that nobody is rushing me or whining.  Actually, Sarah is happy in a greenhouse and that’s something we could do together if only she lived closer.  I bought five flats of flowers and vegetables.  I’ve planted little more than one flat so far, but I already know that more begonias and impatiens are needed.  Hopefully the weather will cooperate this weekend…and I’ll find some time to putter around in my flower beds and garden.

Meanwhile, look what sprang up around Timothy!!  Some beautiful Rocket Snapdragons decided to winter over.  I suppose because they are close to the house, the wall protected them.  We had a mild winter too.  The snaps that I planted in pots did NOT winter over…sadly.  It’s OK, because I bought MORE.

I planted seeds in my raised bed the other evening.  Going clockwise from the top-left of the U, we have lettuce, carrots, radishes, another variety of lettuce, and then bush green beans.  I noticed that a DAMN carpenter bee has chewed a hole in one of the posts and was buzzing to himself inside the post, all cozy and pleased with his destruction, as I planted.  I could spray him with poison, but I probably won’t.  I hate to kill things. Then this morning, as if I might see signs of life after two days, I stepped out on the deck to have a peek.  GRRRRRRR!!!  There in my raised bed, right there in that pristine, glorious black dirt, sat a chipmonk eating my seeds (I presume it was a carrot or radish seed he was snacking on).  I barked at him – “NO!!!”, and then he scrambled to find a way out and panicked when he realized he couldn’t get through the net.  I ran down the deck stairs, taking my eyes off him only briefly, but he vanished.  I have no idea how he got in or out.  If he comes around too often, Molly will take care of him.  She’s quite the huntress.

So, my girls and I are planning a mini-vacay to Philadelphia next month.  I’m excited about spending time with them, and also to see something new.  We’re going to drive to Harrisburg, Pennsylvania, and then Amtrak the rest of the way.  On the way over, we’re going to stop and tour the Trans-Allegheny Lunatic Asylum.  We’re also going to take a day to visit Hershey, Pennsylvania.  The Hershey stuff I’m not as excited for, but Erin and Emily are totally pumped.  We’re going to Chocolate World, apparently.  Really?  I looked up the visitor sites to see if there was really anything worth doing there.  There are photos of a chocolate-themed amusement park.  Instead of Build-a-Bear, you build your own candy bar.  Instead of people dressed up like Micky Mouse and Pluto, there are people walking around dressed up like candy bars.  I asked Emily if she was really all that excited about having her picture taken with somebody dressed up like a Reese’s Cup.  She said, “Mom, I want to marry the Reese’s Cup.”  I guess she is all that excited.  The highlight of the trip, at least our expectation is that it will be the highlight, is a private tour of the Mütter Museum in Philadelphia.  There are plenty of things to do in Philadelphia – we will have 2.5 days there.  Then it’s home again.  We are all just too busy, sadly, to get even a whole week together.

Gracie is a snarly beast – she is nasty to other dogs and strangers.  As such, I don’t take her for walks in our neighborhood because there are too many dogs running loose, and there are always people out walking around.  I take her to a road, over close to where the gym is, that is mostly deserted.  It’s a nice place to walk because there are very few cars, lots of deer and other wildlife, honeysuckle that smells heavenly, and wildflowers everywhere.  This time of year, there are millions of daisies and coreopsis.  The milkweed is just starting to bloom too.  We parked about a quarter mile from the road, and when we got to it, the road department had apparently decided to spray the sides of the road with herbicide rather than mow - this morning.  Really??  Let’s just pollute all we can because who wants to spend money to run a mowing truck along that two-mile stretch of abandoned road? That would take at least 10 minutes, so let’s just poison the deer, rabbits, turkeys, and anything else that happens to drink the water.  Stupidly, I thought Gracie and I could just walk and I would keep her out of the blue poison that blanketed all the beautiful flowers along the side of the road.  Long story short, no I couldn’t.  She and I both got into it.  Her legs were blue, her nose was blue, and her tail was blue – like robin-egg blue…or Easter egg blue. As soon as we got home, I gave her a bath and washed that shit off of her.  She didn’t appreciate the bath - she even growled at me a few times. Then, I took a shower too.  Maybe I’m too paranoid, but I don’t like poison.

University #1 is a wrap, and I’m on break from that school until August (other than some training next week).  It’s a busy weekend for University #2 with six classes going on, but one of those finishes tonight, so just a few more days of grading papers and life will get much easier.
Even with all the many tasks on my to-do list, today was just WAY too splendid to sit at a desk all day.  Someone and I loaded up Gracie up and went for a long hike at Greenbo. My God, it was a glorious day!  Clear sapphire sky with just a few puffy white clouds, breezy, cool – absolutely perfect for hiking!  We walked about 4.5 miles of Claylick Loop.  Long hike?  Considering what it takes to get on and off the trail – yes, it’s a long hike.  The trail runs mostly along the tops of the hills, so part of the journey not counted in the 4.5 miles is getting to the trail, and then getting off the trail.  Getting to the trail from the marina entails a steep climb – about 45 to 65 degrees all the way up (and up, up, up) a rocky, loggy, snaky path.  By snaky, I don’t mean that the path is curvy, it is…but I mean literally, you keep your eyes and ears open for snakes.  Today was cool, so even if they were out, they’d be moving pretty slow.  Still…I don’t like them.  Gracie likes to lead (i.e., pull) and Someone likes to have her leash, so they are always in front.  Someone talks a lot, so I think we have enough noise to scare the smart snakes away.

Coming down off the trail is a bit easier.  Part of it slopes gradually, but the very last part is VERY steep, with lots of tree roots, loose rock, and of all things, sand.  Today, it was dry and the ground was clear enough that I just sat down on the ground and scooted/slid down.  Someone did the same, partially dragged down by Gracie who was eager to drink from the creek at the bottom of the hill.  We come off the trail about a mile behind the campground.  There’s a nice flat road (except for a few small hills), so it’s a pleasant walk back to civilization and my car.  Good thing…I was pretty tired!

My raised bed has some dirt in it, finally.  I bought and dumped nine bags of organic raised bed soil in it.  I’m thinking (hoping) that eight more will finish it.  Then comes the planting…and waiting.  We will see how Farmer KYLady does with this new venture.  The farmers around here say it’s safe to plant after Mother’s Day.  I’m thinking, it’s OK to plant any time now…Mother’s Day is next Sunday.

By the way, Emily gave me a hug today and told me that every day is Mother’s Day.  She’s so sweet! 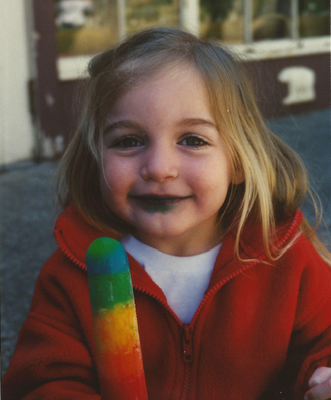 Posted by KYLady at 8:33 PM No comments: