Summer is waning.  Every day now, until the sun sets, jar flies sing their sad serenade in ode to the shrinking corn stalks and withering cucumber vines in the garden.  Summer is not over – far from it, but the girls are back to school this week and my new semester starts today.  Where did it all go?  Except for a few vacation days, it seems I completely missed out.  My life has become too busy.  For too long, it has been too busy.

As a very young girl, I remember that summer seemed endless.  Perhaps it was because calendars and clocks were of little concern unless there was something specific I was looking forward to.  Now as an adult heavily entrenched in the rat race of day-to-day survival, Father Time has complete control of my life.  Not that I offered it up to him, but maybe it was done without realization or direct intention on my part. 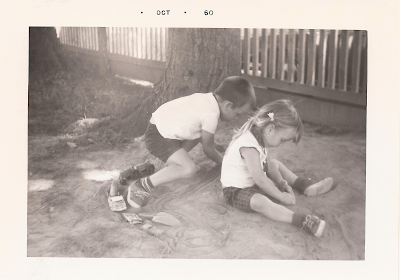 Maybe it was boredom that made summer seem endless, but I don’t remember boredom.  My summer was fields of corn and tobacco, green pastures dotted with black cattle and purple ironweed, and giant walnut trees with branches upon branches.  I imagined walking between rows of tall corn and fat tobacco plants to the very edge of the Earth, or climbing a grand, old tree until I could touch the clouds.  Lost in imagination for hours, the afternoons dimmed into evenings, and then into nights and new mornings.

Those were not the good old days, but more a good state of mind – a mind that had no regard for current events, paying bills, or keeping things orderly.  Pretty much, it was just living day-to-day rather than managing life for myself and family.  Perhaps that is the key to unlock the shackles that Father Time has put on me – I need to stop managing and start living.  Is that even possible? 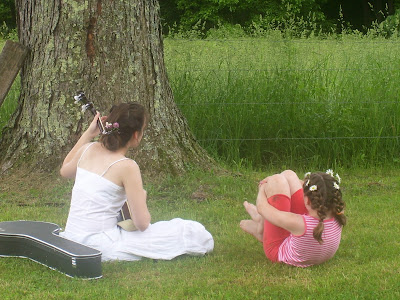 Posted by KYLady at 8:01 PM No comments:

escape to the mountains

KYLady was grateful for a gloomy day on Thursday when she wrote this post.  It fit her mood – gloomy with no hope in sight for a day off anytime soon.  Don’t misunderstand…she is also extremely grateful to have two teaching jobs along with her real job that pays all the bills.  Financial security is a blessing.  But…(and there’s always a but, isn’t there!!)…this life of all work and no play gets tiresome.

University #1 starts in less than two weeks.  I’m now in full force trying to learn the new simulator platform my students have to use.  I have to build assignments in the platform and learn it well enough to help the ones who can’t figure out how to use it.  The university didn’t turn it on until last week, so now it’s do or die.  I have three classes to get ready, even though one will surely be cancelled.  I still have to get it ready on the outside chance that a rush of students will enroll at the last minute.  One class is overfilled (9 students over the cap), and the other is almost full.  That third class that I now hope gets cancelled is a face-to-face night class, an hour’s drive from home.  It could be fun, but the two hours of travel time will eat into my free time…which is very scarce these days.

I just picked up a fifth class at University #2 this week.  We’re in week 3 of an 8-week session at that school.  Apparently there was an issue with the professor, and I’ve taken his place.  It’s a small class and an interesting topic, so that’s good.  I’m finding that a small class does not equate to less work at this university.  Fewer students requires much greater involvement in the discussion forums.  That too is good, because it forces me to do some research and write which is one of the primary reasons I wanted to move into academia in the first place.

As shitty as this week has been, last week was just as m-a-r-v-e-l-o-u-s.  Sarah, Erin, Emily, and I went on a real vacation.  Real Vacation means I did not even make a bed, wash a dish, sweep a floor, or any other chores (I did have to grade some papers, but that doesn’t count).  It was wonderful to spend time with my lovelies and have five days to putter around with them.

First, we drove to Asheville, North Carolina.  We walked around the downtown area, visited the Arts District (which was not so very impressive), and toured Biltmore Estate.  Biltmore is an amazing place built by the Vanderbilt family.  It’s like a mammoth castle with gargoyles on the roof eaves and more rooms than anyone really ever could need.  I lost count of bedrooms, bathrooms, dining rooms, and billiard rooms.  The indoor swimming pool is larger than our city pool.  The house is filled with grand furniture; it’s amazing to walk through and imagine living there.

My favorite part of the whole place is the gardens and conservatory.  Every species of plant you can imagine was growing somewhere.  I would love to go in the spring to see the wisteria, azaleas, rhododendrons, and spring bulbs in bloom.  With so many plants, it must be nothing short of spectacular.  There are big fountains with all kinds of water lilies blooming.   We walked around and marveled at the variety of lily pads, coy fish, and flowers blooming up out of the water.  I hope to go back there someday.

After Asheville, we drove to Gatlinburg, Tennessee.  It’s a tourist mecca.  The girls called it “Myrtle Beach of the Mountains.”  They were absolutely correct.  Gatlinburg/Pigeon Forge has all the touristy shit that Myrtle Beach has, except they have not managed the traffic as well as Myrtle Beach.  It’s bumper to bumper cars through the main business areas, and parking is very difficult.  We visited a large aquarium at Emily’s request – she got to dissect many ocean creatures last semester in her zoology class and was keenly interested in seeing some of them alive and swimming.  We also visited DollyWood, a Dolly Parton themed amusement park.  This was on both Erin and Emily’s bucket list.  It was OK…I liked it better than King’s Island (the amusement park that is closest to home).  We saw a couple of shows, the girls rode some roller coasters, and we all ate some junk food (cotton candy and Dippin’ Dots).

On the day we drove home, we stopped at Cumberland Falls in Kentucky.  That was on my bucket list.  It is a lovely area; the waterfall is beautiful.  Of course, I saw all that water (particularly the stream below the falls) and was thinking what a beautiful place to take my kayak.  It’s a three-hour drive to get there from home, so not something I’m likely to do in the foreseeable future.

In the evenings, we played Catan.  It was fun, although “some” of us were very competitive (perhaps overly competitive) in the quest for victory.  As far as my experiences playing the game, there was never a glimmer of hope that I might win.  In one game, at one point, I was in a position (finally) to build a city if nobody robbed me before my next turn.  Of course, that never happened.  Sarah won the game before my next turn.  *sigh*

The weather for our vacation was summer bliss.  Sunny and hot every day…perfection.  What a blessing it was to have time with my girls, all together.  It rarely happens these days.  Soon, Sarah starts back to work at her teaching jobs, and Erin and Emily go back to school.  This next week will be a flurry of shopping and packing, and all too soon, the house will be quiet again.
Posted by KYLady at 9:25 PM No comments: