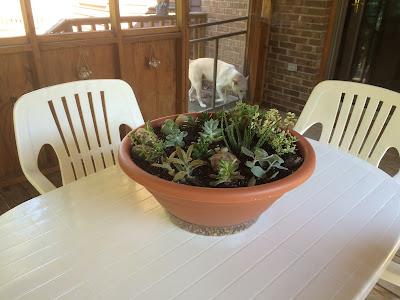 And what will happen to the new ceramic bowl?  Pansies!  I’ll plant a bowl of pansies for the porch just as soon as the greenhouse gets them in.  It should be soon!  I’m starting to see pots of mums for sale around the grocery stores.  Fall is coming.
Posted by KYLady at 4:52 PM No comments:

August is flying by.  Heck, all time flies by these days.  Old age has warped my sense of time, or so it seems.

Someone spent two weeks in South Carolina with his familyin June.  In July, Emily spent two weeks in North Carolina with her boyfriend, and Sarah went to China for a few weeks.  Although Sarah’s trip was not really a vacation (she went there to perform music with a group), it was still a grand adventure.  Erin had been working most of the summer and I was not using vacation time for anything other than teaching classes this entire year, choosing to get paid for left-over vacation time.  Trust me – there was not much vacation left over by the end of June.

Anyway, Someone told Erin that if she could get a few days off work, he and I would take her anywhere she wanted to go.  Anywhere.  Seriously?  It was completely out of character for Someone to make such a bold offer because he hates going to unfamiliar places.  He remarked to me that he was quite certain Erin would choose Myrtle Beach, Disney World, or maybe someplace she’d never been like Hilton Head or Wrightsville Beach.  Clearly, he fully expected her to select a beach or amusement part.  I knew better…and I fully expected her to select Las Vegas, New Orleans, or maybe San Francisco.
Erin surprised both of us and selected Chicago -  a place she had traveled through very briefly on a school trip and a place Someone and I had never been to.  I only had a few days to make reservations by the time she picked a place to go.  As it turned out, Someone insisted he just “couldn’t” take off work.  It was too expensive to fly on such short notice, I was not eager to drive into the big city and pay $40+ to park my car every day, so we took a train.

The train itself was a great adventure.  I rode Amtrak once when I was a kid, and Erin had never experienced Amtrak.  Our tickets were very reasonably priced.  I drove to Louisville and picked Erin up there, and then we drove to Lafayette, Indiana – a few hours south of Chicago.  Lafayette became part of our adventure; it’s a small and quaint college town, a place I selected by virtue of its location on the map.  We had time to drive around and walk around town.  Parking at the train station was practically nil, but we found a parking garage nearby (and paid nothing to park there for 5 days).  We spent the night in Lafayette.  We caught the train very early the next morning and found ourselves at Union Station in Chicago mid-morning on a Saturday.

The whole train experience was very pleasant.  Lots of room in the seats and for our legs.  We had AC power right there at our seats, so we didn't have to worry about our batteries dying.  Northern Indiana and Illinois are mostly flat fields of soybeans, corn, and wind turbines - not a lot to look at, but we went through several small towns and those were interesting to see.

While in Chicago, we did some typical tourist things – visited two museums (Fields Natural History and the Art Institute), the Navy Pier, Shedd Aquarium, and Millennium Park.  Of all that, I think the totem poles in Fields Museum were my favorite thing.  We went to the theater Sunday evening and saw The Book of Mormon.  It was great!!  Really hilarious, especially if you know anything about Mormons.  It was very inappropriate, and I know poking fun at a person’s religion and sexual orientation is not politically correct, but we both loved it.  The dancing was really excellent.  Great comedy, great show!  We ate deep dish pizza one evening because that is what Chicago is known for.  It was yummy.  We saw a fantastic fireworks show from the Navy Pier, and took water taxis several times – a boat ride along the shore of Lake Michigan instead of a taxi on the city streets.   Our vacation was a real treat for us.  What a wonderful time I got to share with Erin!  We both remarked that Someone (Erin’s daddy) would have been miserable on our vacation.

University #1 is keeping me busy with three classes that started last Monday, and another class that will kick off on September 12th. For somebody who wanted to teach only online, three of my four classes are face to face.  No complaints; I’m grateful for the work.  University #2 has low enrollment right now.  After working steadily for a little more than a full year for them, I have no classes just now and no idea if or when I’ll get work again.  The next session also starts September 12th…I’m hoping they can give me a few classes.  Meanwhile, it’s time to update my CV and start applying again.  Rust never sleeps, and neither should I.
Posted by KYLady at 9:33 PM No comments: