My little brother (Mike) called me yesterday to ask if I could help him with a computer issue.  We chatted for a while because we hadn’t talked for a long time...which is kind of sad given that we only live about 35 miles apart and rarely see each other.  Anyway, he asked if I was going to make cream candy this year.  Quite honestly, I hadn’t even been thinking that far into the future (cold weather or Christmas).  Before we hung up, I promised him that if I did make any, I’d be sure to get some to him.  He loves cream candy.

My grandmother made cream candy every year until her shoulder got too eaten up with arthritis to pull it.  She took a break from making it, finally had shoulder replacement surgery, and then I helped her make it a few years after that.  She was a master at making it.  I was a poor apprentice in comparison.  She always made a double batch, and when it came time to pull the candy (which is one of challenges of making cream candy), she would split the batch into two ropes, giving one to me and she taking the other.  Then we would pull and pull to make the candy cream (pulling traps air into the candy rope).  Only my rope, especially when it was hot, always transformed into a mass of frayed strings whereas hers was always a beautiful shimmering rope.  We would swap and she would take my mess and transform into what it should be while I turned her beautiful rope into a mess.  Once we traded enough times, we’d have two perfect ropes of candy and then we cut the ropes with scissors as quickly as possible.  Cutting is another challenge.  If you cut too soon, the candy isn’t as creamy.  If you cut too late, the candy is too cool to seal at the cuts and so it isn’t as creamy.  Once Alzheimer’s took over, she lost all interest in cooking or baking anything, but before that happened, she wrote the recipe for me.  This is a photo of it.  Her penmanship was lovely.


During World War II, Mom and her sisters lived together with their children on Glover Street in Portsmouth, Ohio.  Her sister, my great-aunt Ruth, still lived in the same house until I was about 12 or 13 years old.  I remember it well.  It was an old two-story white frame house with practically no yard but I huge maple tree in the front with big roots that caused the sidewalk to heave up.  All the houses on the street looked similar and were close together.  Aunt Ruth was always my favorite aunt.  Why?  I think it was because she was always cheerful and she laughed a lot.  Not only that, she always had candy and gave it freely to my brothers and me.  Bribery will get you everywhere, perhaps.

Before the war, Ruth’s husband got sick and died, leaving her with their three children who were still young.  Her sister, Louise, was not married and moved in with her to help with the kids while Ruth worked at the A&P grocery store.  As it were, Louise would have been married, but her fiancé died in a car wreck.  It was many years before she met another man and married.  Anyway, once my grandfather went off to war, my grandmother and her son (my dad) moved in with Ruth and Louise.  My grandmother and Louise both worked at the Selby shoe factory, but with three adults in the house, somebody was always there to deal with the kids.

In late November, the sisters began taking orders for cream candy.  They were able to sell all that they could make.  Because of the war, sugar was rationed.  The shortage limited the amount of candy they could make.  My grandmother told me that when they priced candy, the cost was in dollars plus sugar ration coupons.  They made the candy outside on the screened porch on the back of the house during the winter – the colder, the better.  There was a large wooden table on the porch where they had three marble slabs to pour the candy on.

After the war, my grandmother made the candy every year as Christmas gifts for her sisters.  We took a box of it to school for teacher gifts.  She also made it to sell in the church bazaar.  It was famous – Lucille’s cream candy brought top dollar at the bazaar every year.

I have a marble slab and I’ve made cream candy with it, but her recipe is very inconsistent for me.  Perhaps it’s just finicky stuff.  Mom always told me the humidity has to be very low and the temperature very cold for it turn out.  She said that there was a specific brand of cream of tartar that was required for the recipe, but the brand was no longer available after the late 1960s. Without that special brand, she had more failed batches herself.  We didn’t mind.  We were happy to eat her failed batches whether they were chewy taffy or ugly lumps of hard candy.

I have another recipe that is a little bit more fool proof.  With this recipe, three out of four batches will turn out OK (on average).  You will quickly note that KyLady’s penmanship is not nearly as lovely as her grandmother’s.


Now, before I post this, I realize old KyLady’s memory is not so good as it once might have been.  I have already written about this entire story pretty much here.  It’s basically the same story, but with some added details this time.

Posted by KYLady at 7:55 PM No comments:

I love my work, but no kidding, it’s officially “fall break” for me as of 3:45 this afternoon and I’m loving it already.  It’s not that I won’t be working through the whole thing, but more that I won’t have to go to campus for 11 days.  It was my intent to ONLY teach online at some point in this career change thingie that I did.  That hasn’t worked out just yet, but really, I’m grateful for the experience of teaching face-to-face.  I have way more fun with the students when we are all together in class.  I do have fun...hence, why I love my job(s).

October arrived in glorious splendor.  The weather the past few days has been utterly and completely delightful.  Tuesday evening, I met a friend and we paddled Lake Vesuvius for the first time (my first time, but she had been there once before).  Vesuvius is just across the river in Ohio, even closer than Greenbo, I discovered.  How is it possible that I’ve lived in this area for all these years and never ventured over there (all of 10 miles) to check it out?  It’s in Wayne National Forest and full of cool hiking trails (at least, from what I could see from the water, there are caves and cliffs...cool stuff to explore when hiking).  It was becoming dusk, but I snapped a couple of quick photos.

In other exciting news, the hummingbirds have not yet all left for Mexico (or where ever it is they go for the winter).  The ruby-throated ones are gone, but there’s still a green one hanging around my feeder.  I refilled it yesterday morning and saw the little hummer several times.  I LOVE hummingbirds.

You might remember that I planted sweet peas and morning glories in early summer.  Honestly, I believe it was just too late to plant them.  Nevertheless, the sweet peas vined voraciously, but never bloomed.  Then they withered and died.  Such is my luck ALWAYS with sweet peas.   The morning glories were spindly and finally seemed to want to live and began growing up the poles.  Yesterday, when I stepped out to collect the hummingbird feeder, I noticed a single bloom.  It was so marvelous, that I took a photo.  If it blooms anymore, the deer will discover it and that will be the end of my morning glories.  Tis the season when the deer become bolder about foraging in yards for food.

This morning, I was driving to work, and no kidding, I saw an eagle fly over the highway.  At first, I thought it was a big hawk, then an owl, then even a heron, but then it became obvious that I was seeing an eagle in the wild.  What a thrill that was!  Just before my class, I Googled to see if there really are eagles known to be in this part of the state.  Sure enough, eagles nest at Yatesville Lake, and I was only about 6 miles from Yatesville Lake when I saw the eagle.  Lawrence County in Kentucky has all sorts of wildlife – not only eagles.  They have bears, cougars, and wolves.  Of course, all of those have been spotted in my county...but we have more civilization here. 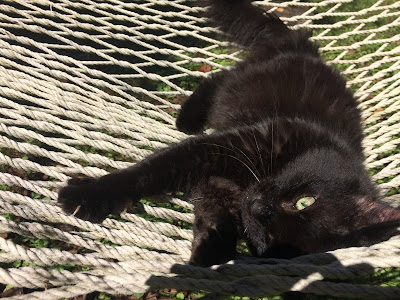 I have plans for my time “off”.  I need to paint the bathroom ceiling, and the family room.  Oh what fun!  There are closets to clear out, and it’s time to shop seriously for flooring once I decide what to do.  I thought my mind was made up, but now it’s not.  Then...there’s another very important project.  More about that later.