While traveling somewhere this spring, we stopped at a Cracker Barrel to eat dinner.  They had a couple of bird clocks at a very reduced price.  I have seen clocks like these in other stores, not nearly as inexpensive as this, and decided to get one.  An image of a different bird marks each hour and on that hour, you hear a recording of the bird's call.  I know what a few common birds sound like, but I didn't know what any of the twelve on the clock sounded like.  Cool!  I thought I would learn them after hearing them a few times. 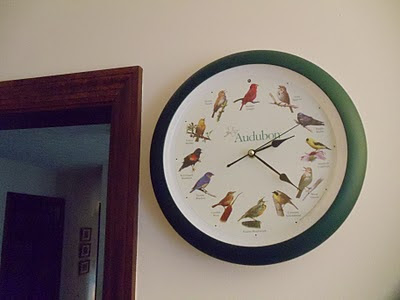 ﻿
As it turns out, the clock's sound mechanism is right up against the wall - the sound is kind of muffled.  When it goes off, it's startling...everyone says so.  For me, no matter which bird it is, it sounds like mice in the wall.  I can honestly say I haven't learned a single bird call, and it's been months!  Maybe I'm just not home long enough.
Posted by KYLady at 8:20 PM