Sometimes I fancy that I’ve become a cyborg, as if having my hands on and my face into such close proximity with electronics over decades has caused my entire nervous system to rewire itself to emulate the devices that have sucked away more than half my life.

Thinking back to the old days when I sat in a cold server closet with my back just two feet from two large HP minicomputers, I did my work on the system consoles which were little (by today’s standards) dim and dumb terminals.  The disks in these old machines clattered and chattered, and their fans roared.  Each box was about the size of a very large refrigerator.  I could monitor CPU activity and various statuses on each computer’s console using a utility that I can’t remember now.  The computers talked to each other constantly, using what was called Class I/O  – at least, they were supposed to talk constantly even when there was nothing to talk about.  In those cases, it was more like “Are you alive?  Yes, are you alive?  Heck yeah, how about you?”  Back and forth, they checked to make sure their companion was still breathing.   When people reported system trouble, typically it was because one computer was waiting for a reply and the other was thrashing (like my brain has been lately).  In the first minutes, trouble wasn’t obvious to me.  But then I could hear the familiar sound the disk made under these circumstances: clackity-clackity-clackity.  It was fruitless – the disk head searching feverishly for an invalid page address while the other sat idle, waiting for a reply – “I know you’re alive, what’s going on over there?  I’ll just hang out here until you figure things out.”  One is searching for something that will never be found while the other waits for a reply that will never be issued.  Reboot both.  Rebirth the process.  It was always the quickest solution.

No resolution.  No resolution but we must go on.  Well, at least we should go on for a variety of reasons.  Reboot.  Why?  It’s unproductive and tiresome.  How?  Take my kayak out and leave the world for a while.

I took my kayak out Sunday afternoon.  I paddled up the Little Sandy on a windy day, but oh my, the sky was bluest blue.  The clackity in my head dimmed and gave way to sounds of wind in the trees, woodpeckers, ducks, crows, and squirrels scolding me from the tree tops.  I came upon three very large flocks of turkeys near the river bank.  Two great blue heron traveled with me, flying upriver until I caught up with them.  No doubt they were annoyed with me for invading their space.  They expected me to turn around.  Finally, I did and never saw them again. 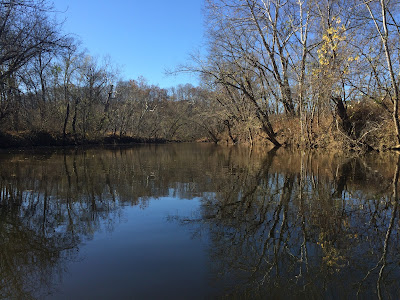 Hopefully, maybe…tomorrow I will have my answer.  The Federal Reserve Board will announce the new discount rate; they are supposed to by middle of the month.  My future hinges on two things: the rate change (or no change) and whether or not I can stay on working casual or part-time.  I’m not altogether sure I want to stay on in any capacity.  If I do, it will be short term…no more than a year, no more than 20 hours a week.  It sounds pretty good...like rebirth, maybe.
Posted by KYLady at 8:33 PM 2 comments: